Cleaning Out My Closet – My Last Days at iApps

For anyone stumbling across this, I was employed as a senior-level Software Architect at iApps Pty Ltd from November 2010 to October 2013. By the time I left, I had climbed to ‘Chief Architect‘ status. And it’s time for the truth surrounding my departure from this company to be heard.

Let it be known that all of the information presented here is factual, and that I can prove every single statement made. Further let it be known that I am providing this information not with malicious intent, but to protect my own reputation and to clear up any inaccurate or incomplete tellings of this story that may have been circulated. If my reputation is to be tarnished, then let it be tarnished by nothing but truth.

And to my former employer, I say the following: Everything on this page is true, and you know it. If you genuinely feel otherwise, by all means feel free to skip the threatening letters and head straight to the courts to commence proceedings against me for defamation. But remember, it’s not defamation if it’s true. It’s not even defamation if it’s mostly true. Also remember that I’m still standing strong, unscathed, on the side of truth, transparency, and fairness. These are my principles; I will fight to defend them. All things considered, I think you’d be best off publicly acknowledging your past mistakes, expressing contrition for them, and taking your lumps. There’s a comments section below you may use for this purpose if you’re so inclined. But that’s entirely your decision.

The facts of the matter

This will be a bit dry and boring. As noted, I am simply stating the documented, provable facts of the situation; not providing a narrative. I invite you to color in your own narrative to go along with the facts as you read. Anyways:

Now, to respond to the allegations leveled against me in that letter (page 1, page 2, page 3) I received. I was held harmless for anything and everything alleged in there, but still. Let’s finish setting the record straight.

Yes, I did seek (and attain) employment with a former client of the company. This occurred after iApps delivered its ultimatum, making it abundantly clear that iApps either could not or would not honor the minimum terms of my employment contract. Why should I then show any further consideration towards an agreement that the other side was clearly unwilling or unable to uphold? Because they got me to sign a piece of paper using promises of a shareholding that was never delivered? Both of those questions are rhetorical.

Yes, I did walk out on the 29th of October, 2013. As clause 13.3 of the Professional Employees Award gives me every right to do when declared redundant. And which I likely was entitled to do regardless, as iApps wasn’t meeting the terms of my employment contract and had demonstrated a clear and persistent unwillingness to do so. The 29th is also my wedding anniversary, so now I have two things to celebrate on that day.

I did contact IBM/Avnet, but only to inform that them I was no longer employed at iApps and to request that they remove the association with iApps Pty Ltd from my personal profile in their system. If iApps’s reputation was damaged by the fact that I didn’t work there anymore…then maybe they shouldn’t have tried so hard to drive me away.

And I did erase my personal information from my workstation. Think things like Internet cookies/persistent logins, stored passwords to e-mail accounts and websites, chat logs, locally cached e-mails, browser history, and the like. All things that are of no value to my former employer, and all things that they have no business using before or after my departure. All of the actual work I did was checked in to SVN, and I did nothing to harm it. My conduct was professional, up until the very end.

However, I did leave behind a nice custom wallpaper, and configure the machine to play some awesome music at login. And to run a script that would set the playback volume to an enjoyable level while simultaneously disabling the system volume controls. It was all good clean fun, caused no harm to the computer, and would take any halfway experienced system admin no more than a couple of minutes to disable. I understand it caused a welcome distraction: 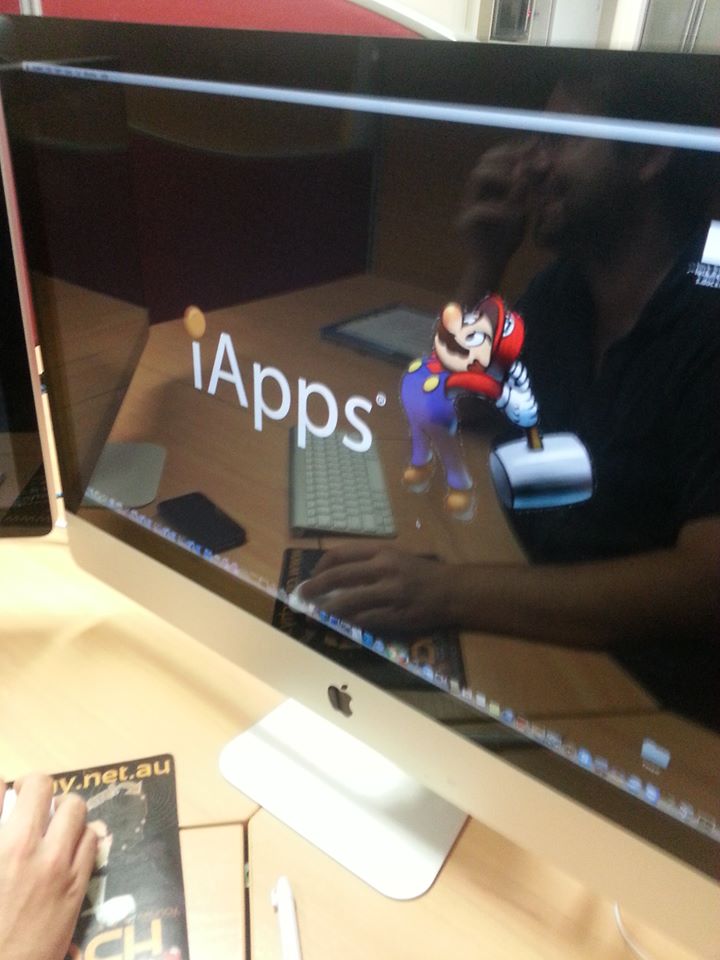 Anyways, back on topic.

No, I did not make “spurious” statements and allegations about iApps to damage their reputation or business. I said nothing untrue, and only discussed my situation in the context of seeking advice and evidence, protecting myself and my colleague(s) from the aggressive and intimidating tactics being used against us, and asserting my rights under Australian law. And besides, wanting to have a good reputation doesn’t mean you can do shady things and then assert that nobody can talk about them because they’re shady and will make you look bad. That’s absurd.

And $200,000 in damages? Fat chance. Though after three years on an iApps-level salary, that’s probably about how much income I missed out on while I was foolishly waiting around for them to make good on their promises of shareholding in the company. I ran my finances backwards waiting on iApps, and when I’d finally had as much as I could stand and demanded nothing more than what I had been promised and was legally entitled to, all they did was try to throw me under the bus.

A number of things fall away as a natural consequence of iApps’s repudiation of our settlement and its subsequent termination by my choice (or to use the legal parlance, by my acceptance of their repudiation). Most important among these various things being terms clause 6, which shrouded all of the above events in secrecy, and terms clause 5, which was so broadly constructed that it made it nearly impossible for me to say anything at all about iApps Pty Ltd, ever.

The value of free speech and the right to free expression should never be discounted lightly. Free speech is important. Free speech is what keeps the tyrants in this world at bay. Without it, we are lost.

I miscalculated gravely when I signed away my right to speak freely. And it feels ever so good to have it back.

To those current and former iApps staff members who assisted me in gathering evidence and building my case, I thank you.

You helped me stand up to an adversary intent on ruining me, and an adversary who likely did their level best to bully and intimidate you as well; your support is appreciated and shall not be forgotten.

Now I don’t usually go for rap, but considering the circumstances I feel this is unavoidably obligatory. Set the volume on your speakers to ‘righteous’, and enjoy:

What hurts me the most is you won’t admit you [were] wrong.
This entry was posted in banter, editorial and tagged fair-work, iapps. Bookmark the permalink.